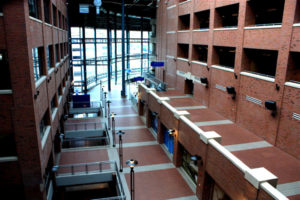 Situated in the heart of Detroit, Ford Field has been home to the Detroit Lions since the start of the 2002 season, and one of the most impressive sports arenas in the U.S. Encompassing a total of 1.85 million square feet of development, the American Brick Company’s veneer panels can be viewed throughout the stadium’s atrium and interior.

When the Detroit Lions moved out of their long-time home at the Pontiac Silverdome and into the $430 million Ford Field, Ambrico’s thin brick installation supplied the stadium with the look and feel of traditional brick at a fraction of the cost. Ambrico’s brick selections range from contemporary smooth and glazed brick to traditional reclaimed looks. Their special shapes of thin brick can be used to create ornate sills, cornices, quoins, and other unique architectural details to give each space or structure its own originality. 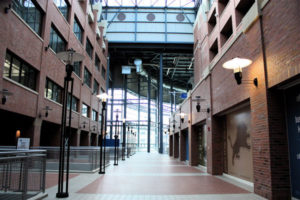 Ford Field houses luxury stadium seating, restaurants, food courts, lounge areas, banquet facilities, entertainment venues, and commercial space. In 2000, the field was chosen unanimously by NFL owners to host the Super Bowl XL on February 5, 2006, which brought international attention to the field and its detailed thin brick structure. To complement the stadium, Ambrico’s brick panels were attached to the stadium’s exterior and interior walls, producing the durability of real brick at an overall depth of only 5/8”. Each panel was completed with full-depth mortar joints to ensure long-term durability and strength while remaining indistinguishable from traditional bricks.

Ford Field’s traditional-brick enhancements by Ambrico were completed on schedule, within budget, and supplied the stadium with a bold look of significance as the newest sports venue in the city.