Veneer panels provide an elegant renovation option with all the luxuries of traditional brick. 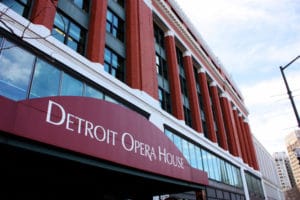 WARREN, Michigan, September 13, 2010—Veneer brick pioneer, Ambrico (https://ambrico.com),has successfully restored the Detroit Opera House’s exterior with its remarkable EZ Wall® System. Located on Broadway Street in the heart of Detroit, the five-story opera house was established in 1922 as the fifth largest theater in the world, seating up to 4,250 people.Throughout time and many renovations later, the building’s surface had begun to wear and showed no noticeable signs of the cultural significance the Detroit Opera House holds for the city of Detroit. The thin brick experts at Ambrico consulted with the theatre’s staff to develop an alternative to a traditional-brick appearance, without the weight and laborious upkeep, while giving serious attention to cost effectiveness. The result was an elegant alternative-cladding system that preserved the look of traditional masonry and provided the opera house with a stunning new atmosphere and the appeal it deserves.

Ambrico’s EZ-Wall® brick panels were attached to the building’s original facade surface and skillfully applied, producing the durability of real brick at a overall depth of only 5/8″. The opera house’s thin brick is architectural-steel grade, embossed, hot dipped galvanized to G-90 finish, and has approximately the same thermal coefficient as brick and mortar. Ambrico’s veneer brick also eliminated the need for lintels,
reducing overall project cost. Each panel was completed with full-depth mortar joints to ensure long-term durability and strength, indistinguishable from traditional bricks.

The Detroit Opera House restoration project was completed on schedule and allowed Ambrico to successfully provide the theatre with the notable look of historic significance hoped for at a price within the theatre’s budget.

About Ambrico
Serving the entire United States from its home base in Warren, Michigan, Ambrico uses its patented EZ-Wall® engineered thin brick system to economically replace and accent all types of siding products with genuine clay, kiln-fired thin brick, incorporating the look and feel of traditional brick veneer in a wide selection of brick colors, textures and finishes to complement the design and site requirements of any
project. Visit https://ambrico.com for more information or to receive a quote.