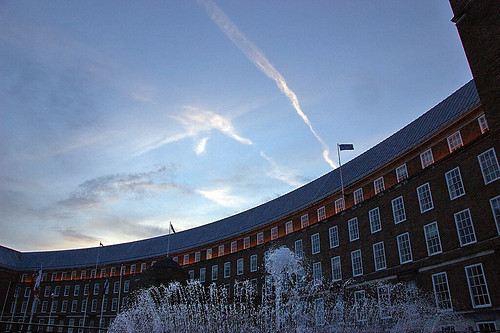 “The Council House has been the seat of local government in Bristol, England since 1956. It is situated on College Green, opposite the Cathedral and at the foot of Park Street in Bristol city centre. Throughout its history it has been home to Bristol city council. It was designed in the 1930s but built after World War II. The architect was Vincent Harris.It is a grade II* listed building. The concrete frame is clad with very wide, thin bricks, with Portland stone dressings and a leaded hipped roof in a Neo-Georgian style. The steep and high roof with gilded unicorns to the corners of the end blocks.The foundation stone for The Council House was laid in 1938 and the building was opened by the Queen in 1956. The ceremonial entrance overlooks the moat and leads into the reception hall which is lined with local Doulting stone and paved with black and white Italian marble. It also features a blue and gold wall clock, encircled by the signs of the zodiac and equipped with its own wind indicator. The Conference Hall is the largest room in the building. The names of all Majors and Lord Mayors of Bristol since 1216 are cut into the stone walls. The walls of the Lord Mayor’s Reception Room are panelled in English Walnut and there is a colourful frieze displaying the heraldry of the Bristol trade guilds, and, in gold leaf, the names of famous Bristolians.” – Wikipedia 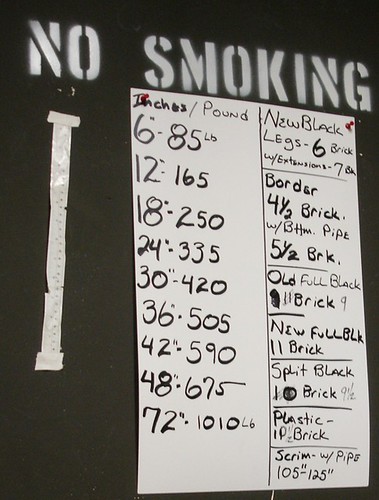 Image by fingle
A single three-inch steel brick weighs about 42 pounds. (There are thinner bricks available for fine-tuning!) This chart tells you how high to stack the bricks to achieve a particular weight. If the brick stack goes too high, there is a third rail above the second rail to allow the loaders to remove the bricks without too much trouble. The list on the right gives the approximate number of bricks to use for a given, known set piece, be it a border, a leg, a full black, or what have you… Counterbalancing is an art!