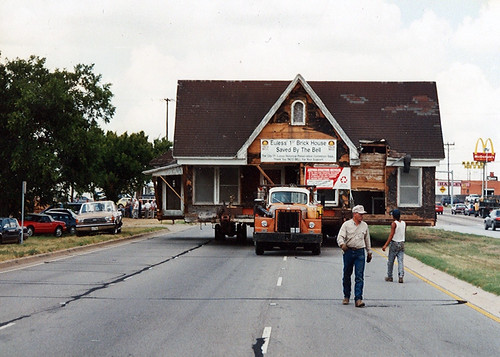 Image by Euless Historical Preservation Committee
This is certainly not your everyday mobile home! In 1994, when Euless’ first brick house was in danger of being demolished, businesses and citizens of the city came together and raised funds to move this beautiful home to what is now Heritage Park.

Homer Fuller, who built the house, was a member of a pioneer family, prosperous businessman and one-time Mayor. In 1932, Homer and Edith built a new home in the 100 block of East Euless Blvd., next door to the grocery, at a cost of ,200. Its distinctive tan brick veneer was typical of fine homes of the 1920s and 1930s. A particularly notable feature of the one- and one-half story structure is the graceful arcades of the entry porch under a cross-gable roof.

After the family sold the property in the mid-1970s, the house fell into disrepair.

The house was saved, thanks to much hard work and the cooperation and financial support of the City of Euless, Taco Bell, Saebit Baptist Church, the Fuller family and many dedicated citizens. The property had been bought by the Saebit Baptist Church, which wanted to erect a church building. The church sold part of the property to Taco Bell for a restaurant. When the house was scheduled for destruction, the Euless Historical Preservation Committee garnered support to save it. The house had to be moved from the site. Each brick was carefully removed, and the house’s frame interior moved to Heritage Park on Cullum Drive in 1994, where it was placed next to the Ruth Millican Center. The house was carefully restored and the original brick replaced. Furnishings from the 1930s and 1940s, including original pieces donated by the Fuller family, have been placed in the resorted house.

Opened to the public in 1998, the Fuller House is a focal point for historical artifacts, photographs and other records from the City’s past. As the City’s Museum, the City of Euless and the Historical Preservation Committee conduct free tours on the second Saturday of every month from 1 p.m. to 5 p.m.